Petulant Twats, this week, steps without invitation into the world of the great legends. I mean, this is the real hall of fame stuff here, but somehow or other I don’t feel I’m telling you anything new.

The number three was a terror for the fullbacks, centrebacks, holding midfielders, chefs, hotel owners, lawyers, nutrionists, well mention it, you have it. Diego Armando Maradona is, to many common mortals who cannot dribble past the English team (well, not that hard – ask Mesut Ozil), the greatest footballer on earth. Pretty much by the same people who claim Elvis Presley is still alive and has spent all his life recording endless ballads, in what is now the longest streak of denial ever.

It is pointless dredging once again through Maradona’s stellar career on the pitch. The guy deserved the nickname Pibe de Oro more than anyone else, his immense technique having led to glory the likes of Barcelona and Napoli in his heyday. But once he came off the pitch, Maradona would turn to his favourite habit, that of self indulgence, be it when aggrandising himself in front of the media, or consuming the odd line of coke here and there. Banned in 1991, merely a year after knocking home side Italy out of World Cup 90 in front of his crowd in Naples, he would return to action with Sevilla after a 15 month ban (these days you’re out for a much longer spell and like ex-Sampdoria Francesco Flachi, you might need to find alternative employment as a salumiere). He would return to Argentina in shame.

There was a little incident I was about to forget. In the quarter final against Brazil, left-back Branco (who could really hit freekicks) asked some water to the Argentinian crew. The excerpt from v-brazil.com, backed by an article in the Argentine press, reads as follows:

Later on, Branco said that he felt dizzy during the match, and was suspicious about the water. Argentinians were offended by the idea that they would use such low tactics, and said that Branco was looking for excuses. In 2005, Maradona confirmed that the water that Argentina supplied to Branco was somehow contaminated.

And yet there was more. Come 1994, Maradona is in the national team for yet another World Cup, this time in the humidity of the US of A. Listen him jibe Franco Baresi who “might not be able to withstand these temperatures” and watch him scythe through the Greek defence like a knife through hot butter in an epic 4-0 rout. And being subsequently carried off the pitch after the game by a nurse. There you go, another piss test, another failure, this time someone must have slipped some ephedrine in his drink. “Fall from Grace II” titled Newsweek a few days later.

The events that followed in subsequent years are often forgotten, even though Maradona can’t seem to be able to breathe without at least two gantries of spots illuminating the centre of his stage. So from drug addict he went very much the Elvis route, gorging himself into an unrecognisable gooey monster. His “weight problem” (munchies?) led him to reach a new peak, that of being the first player visible from space. Surgeons operated on him, eventually managing to find and staple his stomach. The litres of lard extracted from Maradona’s insides are conserved at CERN, in Switzerland, where scientists are still trying to determine whether it can be used as a replacement for fossil fuels.

His fondness of the centre stage took him to the set of La Noche del 10 (The Night of the Number 10), a TV show modelled on the Raffaella Carra type of shit they showed in Italy. Our hero is now losing weight and leading the ratings on Argentine TV. What next?

Oh yes, coaching! Why not coach? Because nobody wanted to give him a break, and with this off the pitch track record, it was hardly surprising. So, to get him out of his superstar world where he befriended the likes of Tyson, Fidel Castro and Hugo Chavez (our Diego is also a revolutionary in addition to being a compulsive eater, although the two don’t go together I understand), Maradona was handed the role as manager of Argentina’s national side.

Now the World Cup is still a bit fresh in our minds, but let me remind you, the run up was a disaster for Argentina. For example, with Maradona at the helm they lost 6-1 to Bolivia, something that I can hardly manage blindfolded during a drunken Playstation night with the boys. They did qualify, fourth and well off the pace, as Dunga’s Brazil breezed through followed by Paraguay and Uruguay.

A media darling in the wide sense of the word, Maradona invited the gathered press to “suck it” (he was not referring to a lozenge there) as he revelled in his epic qualification mission. Which should have been straightforward for any coach with decent brains who could pick 22 men out of a stellar national pool. 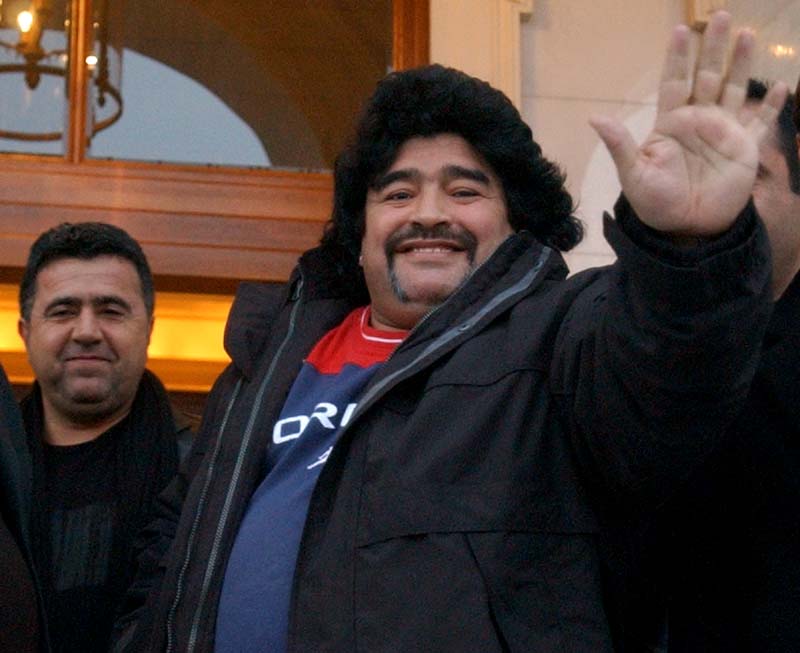 Diego Maradona: Another picture of health.

Still, Maradona managed not to pick Esteban Cambiasso, arguably the best Argentine midfielder in Europe last year, while opting for other players who lacked the grit and quality to even play for Ecuador: Otamendi, Gutierrez, Pozo (Who? asked the press), Garce…

So off to South Africa we go for the Maradona show. You learn something new everyday: kissing players before the match works wonders. Maybe he wasn’t affectionate enough before the match against Germany, where Argentina got a serious 4-0 drubbing that was only too deserved. Frankly, he could have won the Oscar for his performance as a prancing touchline lunatic in a suit that’s a couple of sizes small, but he failed to notice that Germany played football not costume dramas and were better at it than Greece, South Korea or Nigeria. What to tell the press?

The obvious fallout, and all that, washed down by the media: hands off the Legend, the Pibe de Oro, the proverbial man who had it all and threw it all away. Or rather, sniffed half of it, ate a quarter and spat in what was left.

Diego Maradona might have been the biggest footballer of his generation. His two most famous goals both came in the same match, and one of them was a glaring handball that yelled “this is for Falklands” (as the romantics have it). Yet, he is the worst example a footballer can set for future generations. I will surely not show my kids a DVD of Maradona. I’d go for the cleaner champions, the Van Basten, the Koemans, the Rijkaards, the Pele’s (oh, hated Brazilian Diego-enemy) , or the Lionel Messi they all call Diego Maradona II. A bollock that’s as laughable as the notion that the world is flat: Messi is way too busy playing the beautiful game to let himself drown in the mess of arrogant self-indugence that has kept Maradona afloat since retirement, and maybe even before.

The immensity of his footballing talent ain’t enough to rescue him from PTF 03. I will leave you with the words of Jorge Valdano, another of those fourscore Argentine legends, who probably sought to keep Maradona as a buzzword for the Messi’s, the Aguero’s, the Pastore’s of this generation:

He is someone many people want to emulate, a controversial figure, loved, hated, who stirs great upheaval, especially in Argentina… Stressing his personal life is a mistake. Maradona has no peers inside the pitch, but he has turned his life into a show, and is now living a personal ordeal that should not be imitated.